I have discovered that eating orange just after brushing my teeth is a very bad idea. (I encourage you to try it.) With that tangy taste of orange tastes so bitter once it lands to your mouth which feels cool because of the mint of the toothpaste. It was a really bad idea and I will not do it again.

I have discovered it after my morning rituals late in the afternoon yesterday. Yes, I woke up late in the afternoon yesterday after almost 16 hours of sleep which was preceded by an almost 50-hour-no-sleep rampage. I am hardcore like that, but can you blame me, bills need to be paid. Anyway, so after that bad bad decision of eating an orange right after brushing my teeth, I realized that my Atlas Shrugged is not with me. Well, I found that I left it at a cafe I stayed on, but no worries, it’s with me right now.

Well, with that I realized, I needed to get a break from AS because John Galt (I’m in the third part right now) is freaking crazy about Objectivism. Lol. It’s not like the first two parts where the philosophy is seamed right in to the dialogue. But with Galt, it is a lecture, so I think having AS away from me for a day is a great rest. However, I realized also that I could not sleep without reading a page, so I decided to go and try Alice Walker’s The Color Purple 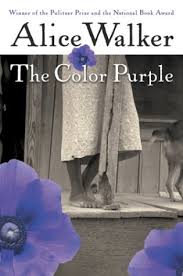 Then I found myself reading it for the next 5 hours until I have slept early in the morning today.

It was a great read. It’s epistolary and I can feel Celie’s insights about the events around her. Everything was raw and I realize that beyond the atrocious grammar Celie has, she is actually an intelligent woman who was learning to respect and dignify herself. I love the part when she starts to question the existence of God and during the dinner when Shug announced that she’s taking Celie with her. I imagined those scenes with as if there is this glow in Celie’s face. It was a very beautiful and tragic yet not depressing novel.

I have watched the movie version of this around two years ago. The one with Whoopi Goldberg and Oprah in it. I barely remember the movie, although I know that Oprah did well on his portrayal as Sofia. I guess I will be watching that movie real soon. 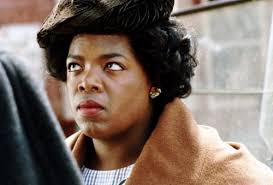 Oprah Winfrey as Sofia in The Color Purple movie adaptation

And yes, I have finished reading that book.