At long last! After reading an exhaustive criticisms on different views on natural selection and Neo-Darwinism, Dawkins is about to elaborate on his Extended Phenotype perspective. (on page 195 of 336)

Back in college, I am so interested in evolution. You see, I took Life Sciences as a major and evolution was my favorite subject. In fact, I impressed my professor for attaining the highest score on our long exam just after answering the test for almost 30 minutes- it was a record, you know! Bragging aside, I have realized then the actual beauty of evolution and how it tells its story while rendering cohesiveness to the entire biological world. Evolution played an important role in how I view life– academically at least. 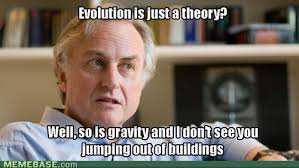 And you know, I am reading The Extended Phenotype for more than a week now. Last time, I decided to reread and start again on Chapter 1 since it is really a hard read. Trust me, reading Chapters 1 to 10 (I will be starting with Chapter 11 na!) is such a long read. Dawkins criticized the current views such as kin selection, group selection, and Lamarckian Evolution. Loads of jargon and it took me a long time to understand some of them.

Studying evolution in college was a revelation; reading TEP is like baptism by fire. I thought I knew much on evolution and I would self-brag and act as if I can explain something biology in an evolution perspective; but I was proven wrong. I realized that there are several different ways of seeing through them and, though Dawkins presented them in a form of criticism, on a certain level, they seem to make sense. However, the contentions and disagreements among biologist, evolutionary biologists to be specific, make things confusing. For the record, Dawkins hasn’t formally offered the Extended Phenotype viewpoint he is advocating; but I think the last 4 chapters will be an easier read.

I hope to finish TEP by the end of next week so I can start reading The Blind Watchmaker. I am so into Dawkins right now and I am expecting to be very smart after this Dawkins phase. LOL.