John Grisham is not failing me here in A Painted House. Although I would love to have a legal thriller at this time but Luke Chandler (the main character) is such a mischievous kid. You know that he is a smart kid. With his comments on his Gran, the Mexicans and the rest of the town, you know that he is not just a kid. His mischievous innocence is inspiring.

I love how he is in a middle of a conflict about religion. At one point, he criticizes the preacher for “inventing new scenes one after another” then he’s really worried about lying. Although he sees religion simply as a mere tool to make kids like him to behave, he is still enveloped under its influence. Will he be able to get through that phase? It’s highly impossible, after all, although he dreams to be out of that Arkansas town when he graduates, I believe he will be trapped their forever.

Brutal I know, but I just have that feeling. His kind of character is a good satire upon his entire environment.

PS: I’m 46% done with the novel already (that’s according to Goodreads), and I guess I will be finished with this book soon.

I think I got too tired of Sense and Sensibility. It’s just a thin book but it is taking me weeks to finish it. That says a lot about my interest on the story. So here I am reading John Grisham‘s A Painted House. 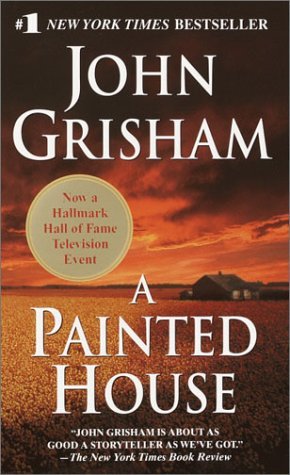 The last John Grisham book I read was The Chambers and it was quite depressing. Also, I have read The Firm-– very very thrilling– and I am pretty sure I have read another Grisham but I forgot about the title. Well, legal drama is quite a new interest for me which started when I got so obsessed with Drop Dead Diva. Now I am watching Suits. So when I visited the local bookstore, I took A Painted House because I think it’s about time for me to take a rest from classic and give myself a dose of legal thriller. (Picked up this one together with Alice Walker’s The Color Purple.

And here I am , realizing the fact that APH is not a legal drama at all! However, reading the first few chapters, I have to give it to John Grisham for his impeccable storytelling technique. It’s like hearing from Luke Chandler (the protagonist) himself. I am liking the sense of humor of the protagonist mainly because he reminds me of Luke from Modern Family. Give me a week, I’m done with this book!

PS: Isn’t it obvious that I watch a lot of series?